Around Italy and Spain, you may sometimes stumble upon a vermuteria – a bar dedicated to vermouth. You can now enjoy a taste of this continental experience in the new Coal Drops Yard complex at King’s Cross in London where chef Anthony Demetre and designer Michael Sodeau have opened a café-bar called simply Vermuteria.

Visiting on a cold, rainy night in December, we were embraced in its warm ambience, surrounded by artwork and vintage advertising evoking the lifestyle of Italy. The striking interiors, designed by Sodeau, feature cycling memorabilia from the 1940s to 1970s when teams were sponsored by drinks companies such as Carpano, Gancia and Cynar.

But the most striking feature has to be the back bar, reaching up to the ceiling, crammed with over 30 vermouths as well as other aperitifs, mostly from Italy but also Spain, France and farther afield. They range from Cinzano, Cocchi and Carpano to Lillet, Casa Mariol and Mauro Vergano plus their own house bianco and rosso vermouths – made in London – on tap.

You can also sample vintage vermouths, such as Isa, Folonari, Mila, Contratto Canelli and Villa Ducale while stock lasts, and there is also some vintage amaro to explore such as Rabarbaro Zucca, Lucano Vena, D’Abruzzo Jannamico and Santa Maria al Monte Vignale. 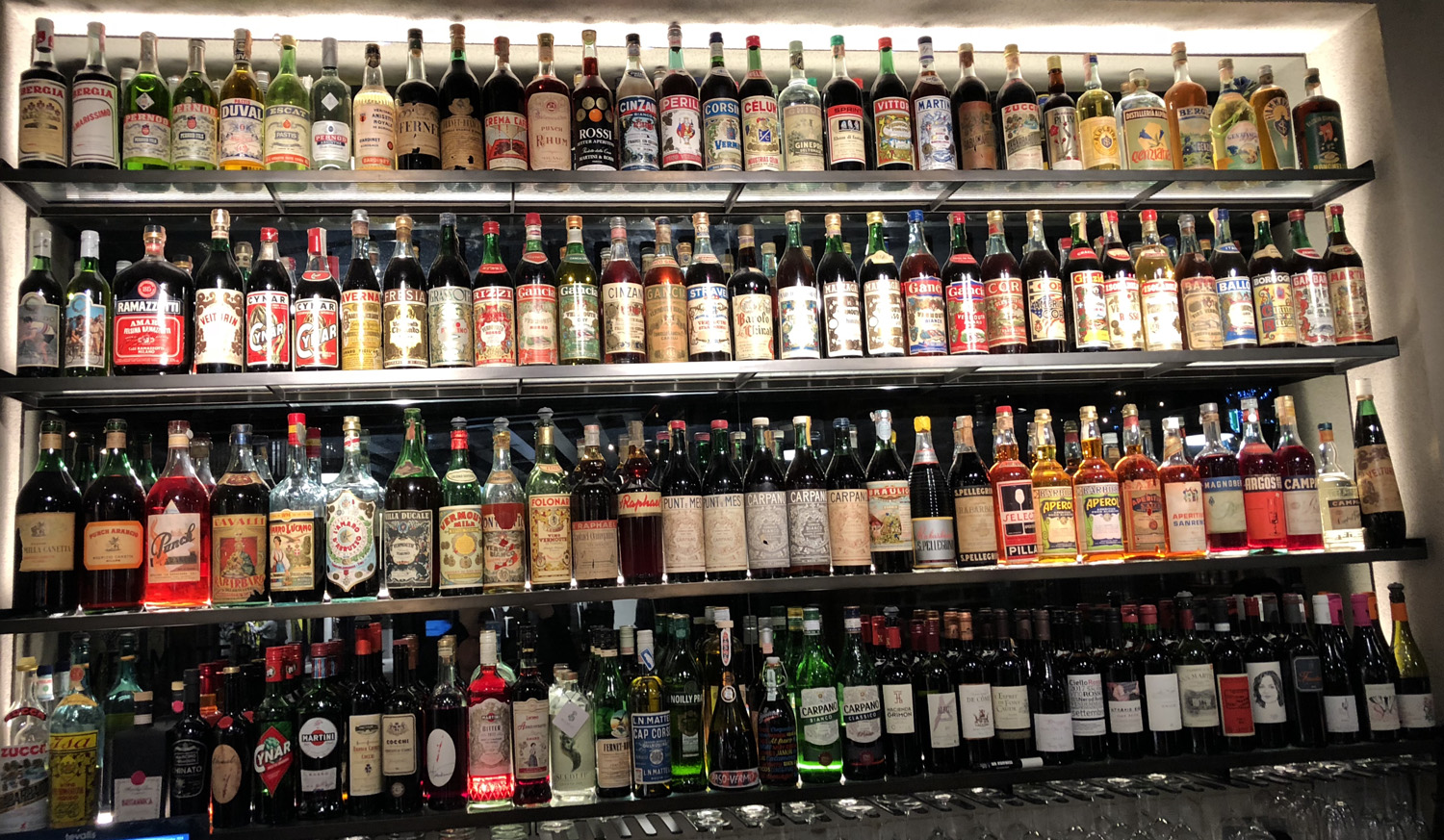 Demetre and Sodeau want to celebrate the simple aperitif which has been gaining new fans in the UK thanks to the trend towards lower-ABV drinking and refreshing spritz-style drinks, especially in the summer. The vermouths are recommended for enjoying with food, with Vermuteria offering a regularly changing all-day menu that includes cicchetti snacks, cheese, charcuterie and salads as well as a selection of Viennoiserie pastries.

It is also open from 8am on weekdays and 10am at weekends for breakfast through to lunch. Mixing British and continental European casual-dining styles, the food is of a high standard befitting the chef who formerly headed Michelin-starred Arbutus and co-founded Mayfair’s Wild Honey.

The fine selection of vermouths and other aperitifs is matched by a short but excellent list of Italian-style cocktails. It is led by a classic Negroni, made with Tanqueray No Ten gin, Campari and Punt e Mes red-style vermouth, but there is also a superb variation, Negroni V, made with East London Liquor Company’s ELLC Premium Gin Batch No 1, Campari and Antica Formula red vermouth.

Alongside the Aperol Spritz, the rest are other Italian classic such as the lighter Americano with Punt e Mes, Campari and soda over ice and a Sbagliato – a spoiled, or “mistaken”, Negroni made with Campari, Cinzano Rosso vermouth and, instead of gin, prosecco. In line with the cycling theme of Vermuteria, the list is completed by a Bicicletta with Campari, Picpoul de Pinet wine and soda – a classic that may be named for its suitability for cyclists trying to keep their alcohol intake low, like the German shandy Radler, but is more traditionally said to be inspired by an elderly cyclist swerving drunkenly across the road after an afternoon in the local bar.

Open till midnight from Thursdays to Saturdays and to 11.30pm the rest of the week, Vermuteria is a place to while away the time from morning to night. There is a good choice of wines as well as Leffe and Vedett beers on offer, plus great coffee from London artisan roasters, but this is a place to return to time and again for its impressive selection of vermouths and other aperitifs.